The Ultimate Guide to Morning Routines

Everything you need to know about successful morning routines.

By Early to Rise

How you start your day is how you live your life.

Start with energy, conviction, and direction; your life will be full of success, happiness, and fulfillment. By the same standard, if you start your day behind the eight ball, you’ll struggle more to optimize your health, wealth, and mental capacity.

So the secret, it would seem, is waking up early.

This simple act has been proven time and again by the greatest men and women in history to impact their increased success. In the following pages we unearth the a.m. rituals of the greats, from Ernest Hemingway, Benjamin Franklin, Maya Angelou, Anthony Bourdain, Dwayne “The Rock” Johnson, Andrew Carnegie, and more, with the singular goal of distilling an ultimate guide to the best morning routines ever created, and how we can use this information to create our own.

What we have discovered in our extensive research on morning routes is that a combination of science, physiology, and cultural norms are set up to support early risers. Furthermore, it’s been that way through all of history, in every tribe, on every continent.

Today the revelation that the most successful businessmen and women all share the same habit of waking with the sun is chewed on by every news syndicate and lifestyle publication. However many of these articles are misleading, in that they don’t get to the root of what makes a morning routine successful. We’ll dig into that here.

Because as humans we’re hungry to know what hour exactly Bill Gates and Arianna Huffington set their a.m. alarms and what actions they take once the chime sounds that lead to such profound success. Because we want to be successful too. And if all it takes is waking up early— not a $10,000 pill or advanced morning wake-up machine— it’s achievable. 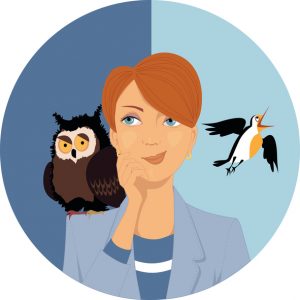 Science and research has determined that for some people, waking up early (we’re talking 5 a.m. and not 10 a.m.) is simply easier. This is determined largely by an individual’s natural chronotype— the behavioral manifestation of our circadian rhythms, based of the propensity to sleep at a particular time within a 24-hour period. Our circadian rhythms ebb and flow at different hours, determining when we normally feel most awake or most tired.

Despite these variants, it’s a universal human inclination to want to press the snooze button if we feel tired in the morning. Our cognition is also naturally weaker in these early hours, making it easier to succumb to fatigue. The mental pathway for hitting snooze says, ‘I’m giving myself a few extra minutes to relax, collect my thoughts, and gain rest.’ But what hitting snooze actually does is make the wake-up process more difficult[1]. And if you happen to fall back asleep, it plunges your brain back into the beginning of your sleep cycle—physiologically the worst state to be woken from. Ian Parker, a writer for The New Yorker, the Independent, and London Observer says, “the harder we feel it is for us to wake up, the worse we think we’ve slept.”

But even if your biological clock makes it difficult to rise early, and have energy in those morning hours, researchers have found that our ability to adjust to different time zones proves we can override much of this natural inclination and reset our circadian rhythm. That means obliterating the inclination to hit snooze.

We might wonder if such a reset is even possible. It most assuredly is.

Basic training for the US military consists of reshaping men and women with disparate backgrounds into a well-oiled machine. Here’s how they describe the 5 a.m. wake-up :

In military basic training, there’s no such thing as sleeping in. You’ll get up at 5 a.m., every single day.

Waking up in the morning is an adjustment process that’s the same for every single basic training class. When you first arrive, the drill instructors require a lot of noise, yelling, and jostling to get everyone out of the rack. Then, sometime around week 4, all it takes is for the drill instructor to enter the room in the early morning and quietly say, “Get up,” and everyone pops out of their bunks immediately and begins their morning routine. It’s an amazing adjustment.

Perhaps this was the basis for the Army slogan, “We get more done before 9 a.m. than most people do all day.”

In the end, it may biologically never be as easy for you to wake up at 5 a.m. as it is for others, but it’s possible nonetheless. Winston Churchill, for instance, physically got out of bed at 11 a.m., but he was diligent about cognitively waking up at 7:30 a.m.[2]

Lose an hour in the morning, and you will spend all day hunting for it. – Richard Whately

The Research of Why Early Risers Are More Successful

It’s well worth the process of adjusting your circadian rhythm to become an early riser, as time and again it’s proven the early bird really does get the worm. (You knew that analogy was coming.)

The most significant research done to correlate successful human characteristics to waking early was done by Harvard biologist Christopher Randler in 2008. Randler surveyed 367 university students and found a higher percentage of morning people agreed with statements like “I spend time identifying long-range goals for myself” and “I feel in charge of making things happen.”

That same year, a Texas University study found college students who identified as “morning people” earned a full point higher on their GPA than self-proclaimed “night owls.” Meanwhile a slew of other studies have connected being a morning person with being more optimistic, agreeable, and having more satisfaction and conscientiousness.

The common retort to these results is to pull up research that connects night owls with having a better sense of humor and being more creative.

This, we are not debating. And perhaps if the cultural structure of 9-5 workdays was instead 4 to midnight, night owls would be the ones reaping the rewards. But alas, the 9-5 isn’t going anywhere, and as it stands today, having a morning ritual before getting to the office at the 9 a.m. punch-in is the leading indicator of more personal and professional success.

That’s because in terms of health, “night owls” are 1.5 times more likely to become obese than early birds, two times as likely to be physically inactive, and 2.9 times more likely to veg out in front of the TV or computer.[3] This same study found that even if both a night owl and early riser clocked equal time sleeping, with the variable being the early riser went to bed 70-90 minutes earlier, the sleep was more restorative and led to healthier life habits for the earlier riser. Additionally, poorer sleep is connected to increased use of alcohol, cigarettes, and caffeine.

Early risers, in fact, have a completely different brain structure than night owls. A German study showed that the latter had reduced integrity of the brain’s white matter (this facilitates communication between brain cells), which is more likely to lead to depression and other cognitive impairments. So not only does society reward the early riser, but our physiology does too.

Try this quick social experiment if you really don’t believe the hype. Go to Google and begin typing, “Success and waking up…” Notice what the autofill immediately suggests, how many articles there are to support that claim, and whether you see the word “late” anywhere.

Sooner or later, the great men turn out to be all alike. –V.S. Pritchett

I Woke Up Early, Now What?: A Look at Routines

If you associate with being a ‘night owl,’ or if your life or job requires you to work late in the evenings, you can still establish systems to override the inclination to sleep late, and instead wake to the dawn, control this time, set the tempo for your day, and achieve great things in life….

Continue Reading the Article from Early to Rise here.

[3] This study was done in Australia on a teenage population.